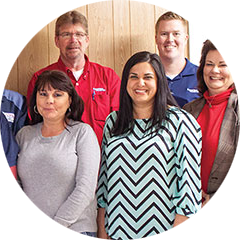 Converter’s Unlimited started up 30 years ago buying scrap converters and stripping them for their precious metals. They gradually moved away from scrap and began re-building converters and selling directly to consumers out of trucks. As the company and market continued to evolve, the owner of Converters Unlimited recognized the need to move away from this type of sales and into the wholesale market. This is where I came in. The owner knew my reputation in the industry and called me for an interview. Honestly, I only agreed in order to spy on the enemy, but they ended up making me an offer I couldn’t refuse. I became the Sales Manager and moved Converters Unlimited out of the peddler market and into the world of wholesale. We began making appointments and selling to auto shops.

About two years ago, I decided to make an offer to purchase the company. I knew with the right staff, we could make some necessary changes to Converters Unlimited. It was a long process but I’ve owned the company for about a year now and we are already seeing growth.

How did you hear about the SBTDC?

After the previous owner agreed to sell me the company, I started looking into procuring a loan. I was discussing with a small group at church about what I wanted to do about buying the business when someone referred me to the SBTDC where I met my business counselor, Debbie Hathaway.

How has the SBTDC been able to help?

Getting a loan seemed simple enough, but without Debbie’s knowledge of the system I never would have received the funding to purchase Converters Unlimited. Between waiting for answers and jumping through hoops, the first loan fell through and we had to start over. It took close to a year before I finally got the funding and there were several times I came close to giving up. It was like being in the Wild West with outlaws shooting at my feet telling me to dance. I was nervous that the owner would change his mind, that the next loan might fall through, that the paper work would just keep piling up but a lot of patience and endurance mixed with Debbie’s encouragement and knowledge of the system finally got us through.

Have you been able to see any growth?

Well, we were able to retain 19 employees, which was really important to me. I have a responsibility to them since they’re the ones that helped make it all possible. I have also been able to bring my son, Kyle, on board, something I never would have done if the company wasn’t where it is now. Our revenue has increased by 2% in this first year, and we are selling to six states with plans to expand soon. Just recently we were one of six companies in the US to be honored as a Distributor Council Member.