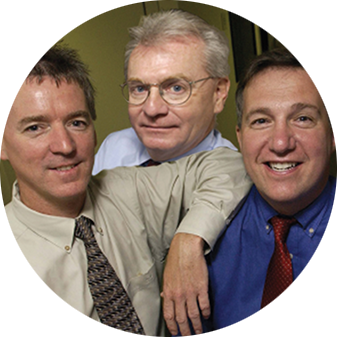 The development of the acclaimed SpeechEasy in-the-ear fluency device by Dr. Joseph Kalinowski, Dr. Andrew Stuart and Dr. Michael Rastatter of ECU’s Department of Communications Sciences and Disorders in the School of Allied Health Sciences opened the world of speech communication for stutterers everywhere. The device is based on a natural phenomenon called the “choral effect,” which occurs when people who stutter speak or sing in unison with others and their stutter is dramatically reduced or even eliminated.

When someone wears a SpeechEasy device and speaks, their words are digitally replayed in their ear with a very slight delay and frequency modification. As a result, the brain perceives that it is speaking in unison with another person. This perception of “speaking in unison” creates the “choral effect”, thus becoming a stuttering treatment that can reduce or even eliminate stuttering. SpeechEasy fits in the ear like a hearing aid, and once the individualized settings are determined, usually within 20 to 90 minutes, the fluency effects are often instantaneous. About 80% of those who use the device for the first time end their stuttering immediately.

The revolutionary device is marketed by Janus Development Group with nearly a hundred distributors in the U.S. and more in other countries. Kalinowski, Stuart and Rastatter continue to research and work on stuttering and other communicative disorders.

HIGH POINT, N.C. — Ben Kordsmeier, 20, is in school studying nursing and expects to have to say many diagnoses and prescriptions medicines that would be tough for anyone to pronounce, but could be especially so for him. He’s a lifelong stutterer.

“My mom could tell as soon as I started talking, she couldn’t understand me. I was always just exhausted at the end of the day and sometimes angry, because it was hard to get my words out and hard for people to understand me,” said Kordsmeier. “You could always feel it coming, just a constant pressure feeling, an every day thing.”

These days, even in what could be considered to be a pretty high-pressure television interview, you’d be hard pressed to know Kordsmeier stutters at all.

He’s working with a new device called SpeechEasy, a new therapy that’s being called a “game changer” for people who stutter.

“With traditional therapy, they had to think so much about every single thing that came out of their mouth, their words, their breath, how they sound. It took all the joy out of speaking and was very limiting. I think most people have no idea how impactful stuttering can be for people socially, emotionally, even in the vocation they choose,” said Maria Lucente, a speech language pathologist in High Point. “This SpeechEasy has changed the lives for so many of my patients.”

SpeechEasy was created by researchers at East Carolina University and is covered by some insurance companies, but not all.